I wanted to try this recipe for a simple reason: I normally hate mortadella, or at least the cold cut sold in stores and sliced to order. I was curious to see if I’d like it homemade. I picked two recipes and techniques and meshed them then added my little touch, but mostly relied on Chef Marlene Mattar’s instructions and ingredients (although she actually uses a much easier method, merely mixing the entire meat paste into a couple sausages). Its an easy dish to make, but it is way more fun if you can enlist a partner to help out. It’s also versatile and could be stuffed with whole garlic cloves or something besides pistachios. My next try, I will use whole pistachios and perhaps shape it into one large sausage instead of two smaller ones. In any case, I had fun making it with my Syrian friend Hanane who was eager to try it (she comes from the Golan Heights, not Aleppo), especially because her four kids love mortadella. I also had fun eating it, slathering it with French mustard and adding some cornichons. It can be served at room temperature or slightly warmed-up, either on its own with a side (I used dandelions aka hindbeh), sliced thin, or sandwiched in bread with condiments and raw veggies. 1 tsp ground rose petals (my version only, not traditional!)

1/2 cup oil to panfry the mortadella

Trimmings: pickles, mustard, or any condiment of your choice 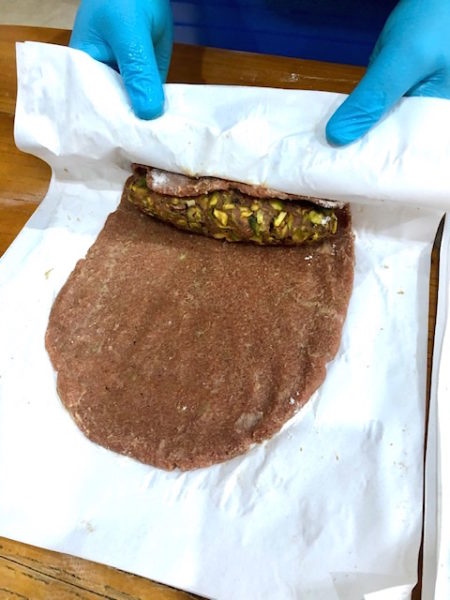 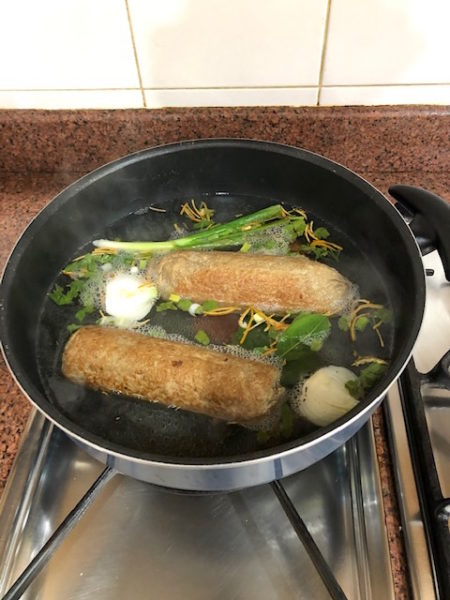 1. Place the meat, breadcrumbs, spices, egg, and garlic in a bowl and mix well; if you have one, it would be best to use a food processor in order to mash the meat mixture into a somewhat smooth paste.

2. Transfer the meat paste into your work counter on a piece of wax paper; take out one third of it and mix it with the pistachios. Split the remainder into two halves and over a piece of wax or butcher paper, roll out each half into a rectangle, about 1/4" thick (more or less).

3. Divide the pistachio roll into two and stretch them to equal the width of the rectangle. Place each pistachio roll at the top of the mortadella and gently roll it over till it looks like a sausage; moisten your fingers to seal both ends with a bit of water.

4. Wrap each sausage in paper and refrigerate for a couple of hours. Unwrap and heat the oil in a large skillet and panfry the sausages till browned, about 10 minutes total on all sides. Cool the sausages.

5. Bring the water, vinegar and seasonings to a boil and let them boil for a minute or so; reduce the heat to low and insert the sausages onto the pot or skillet. Simmer for about 30 minutes, flipping them from one side to the other if needed.

6. Remove them from the stock and let them cool on the counter. Strain the stock and either freeze to use later or cook some bulgur as a side to the mortadella. Wrap the sausages and cool in the fridge for a couple of hours at least.

7. Remove the sausages from the fridge, and slice them thinly. Serve at room temperature or warmed-up with trimmings.