An  elegant appetizer or part of a brunch. I used homemade labneh, because it is a creamy cheese that is healthy (made from yogurt) and easy to make;  just allow  time for the yogurt to drain; dill is a must with salmon and pita chips can be toasted  and require no special effort either.

Make the labneh the day before or even several days before; assembly of this dish takes less than 15  minutes. To make labneh: Place a strainer over a bowl. Place a coffee filter or paper towel over the strainer. Dump all the yogurt on the strainer lined with the paper towel; let it drain for 24 hours, covered loosely with plastic  or a towel  in a cool place or fridge.

The next day, flip the ball of cheese onto a bowl and season to taste with salt. 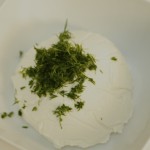 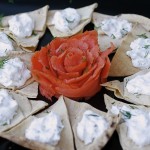 NOTE: Labneh can be bought ready-made at any middle-eastern store.