Had to stop for a kaak on my way to the mountains this weekend at ABU ARAB. ABU ARAB is a kaak place in which kaak is baked on the premises and stuffed with traditional things like zaatar or Picon cheese (a cross between cream cheese and Velveeta)or non-traditional like mortadella and cheese, or muhammara and cheese or even Nutella. They have outlets on the highways and their kaak is to-die-for.

Anyway, so Abu Arab (Abu means dad in Arabic) sells zaatar (by the pound) which is the traditional food that kaak gets stuffed with; however theirs is called Aleppo zaatar. I wanted to find out what the difference was between the Lebanese and Aleppo zaatar and the man at Abu Arab kindly gave me samples  to take home and taste. Zaatar is a mix  of three things: thyme, sumac and toasted sesame seeds (with some salt); it is never used as a spice but is used as a condiment for bread or baked in a flatbread called man’ooshe. At least, this is the Lebanese version and people usually prefer to make their own (that way they trust what goes in it!).

Aleppo zaatar tasted fruity; it has some cumin  in it, just not sure how it is added on or what the exact dosage is. Loved it too, however the taste is radically different from the Lebanese zaatar.

I invite you to visit Alépine’s blog Paris Alep in which she gives her grandmother’s recipe for zaatar, a most unique combo of spices and nuts! Aleppo zaatar is on the left, and Lebanese zaatar (green for zaatar and reddish for sumac) is on the right. These retirees like to play cards by the sea wearing their suits and laying on cardboard sheets. Taken on the waterfront aka the corniche. 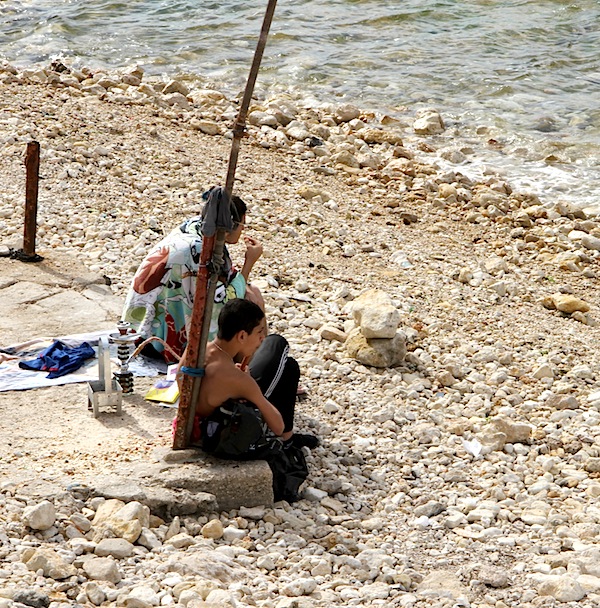 Teenagers smoking hookah by the seashore in Beirut.